Know Your Meme And Create Your Own Meme Template 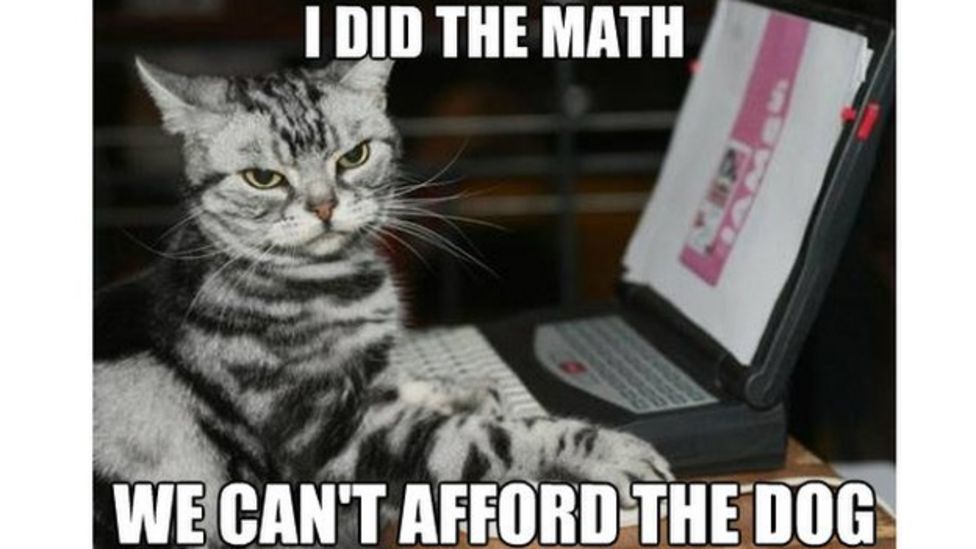 If you’re familiar with that extremely popular Woman Yelling at a Cat meme, did it ever occur to you how its meme template was made?

To create that hilarious meme, two pictures were combined. First, the picture of a teary-eyed Taylor Armstrong yelling and pointing at someone, with Kyle Richards on her side. The other one, a white cat seated (only head is seen) facing a plate of veggies. When placed alongside each other, it appears that Armstrong is confronting the cat.

The left photo was a screenshot of an emotional scene involving Armstrong and Richards in an episode of the reality show The Real Housewives of Beverly Hills. It’s from the show’s Season 2 aired in December 2011.

Miranda Stillabower from Ottawa, Ontario, posted the pic of her cat, Smudge, sitting down at the dining table in her Tumblr account, “All Things Beautiful,” on June 19, 2018.

Who would think a scene from an old TV show and a mundane picture of a cat would be used to create a meme template?

The funny meme involving those two pictures was first seen on Twitter on May 1, 2019.

It was so popular that Smudge, as of this writing, has 1.5 million followers on Instagram

How to make a meme template that would delight the internet again?

Well, creative juices must flow but the basics of creating your own meme template can be learned and done through various websites.

Before you proceed creating a meme template, do you know what a meme is? Do you even know how to say it right?

If this is your first time encountering the term “meme,” don’t say it as “mee mee” or “may may.” That mispronunciation might elicit unexpected laughter from those familiar with the term. Per BBC’s Pronunciation Unit and the Oxford English Dictionary, the right way to pronounce “meme” is “meem.”

We have to trust the English people when it comes to saying “meme” correctly. After all, a guy from the U.K. coined the said term a long time ago in the late ‘70s.

Dr. Dawkins actually gave a tip on how to pronounce “meme.” According to him, as quoted by BBC News, it should “rhyme with ‘cream’.” “Meem” rhymes with “cream,” right?

He got “meme” from “mimeme,” a Greek word derived from the ancient Greek word “mimema,” which roughly means “imitated/copied” in English, according to TodayIFoundOut.com.

In “The Selfish Gene,” the British biologist and ethologist (one who studies animal behavior) compared a meme to genes. Genes can spread and replicate. Dr. Dawkins theorizes that memes, like genes, also have those capabilities.

As parents can pass off their genes to their children, so can a person transmit a meme to another person. From that person, the meme develops on its own and eventually gets transmitted again to other people.

In a cultural context, according to Encyclopedia Britannica, a fashion trend, an attitude, and a concept are just some forms of memes. When one person copies someone’s way of dressing, behavior, or idea, that’s a meme getting transmitted.

How do memes get transmitted from one person to another? It happens visually and verbally by means of day-to-day conversations as well as through mass media.

Now that particular perception of meme by Dr. Dawkins, who turned 80 this year, is far different from how netizens view memes.

For netizens – the people using the internet – a meme is a picture, text, or video that is downright funny or entertaining that it gets frequently shared online. Because of its comic nature, a meme can spread on the web like a wildfire.

The next four websites will help you make your own meme template for free. Note that all steps presented were done using a personal computer. 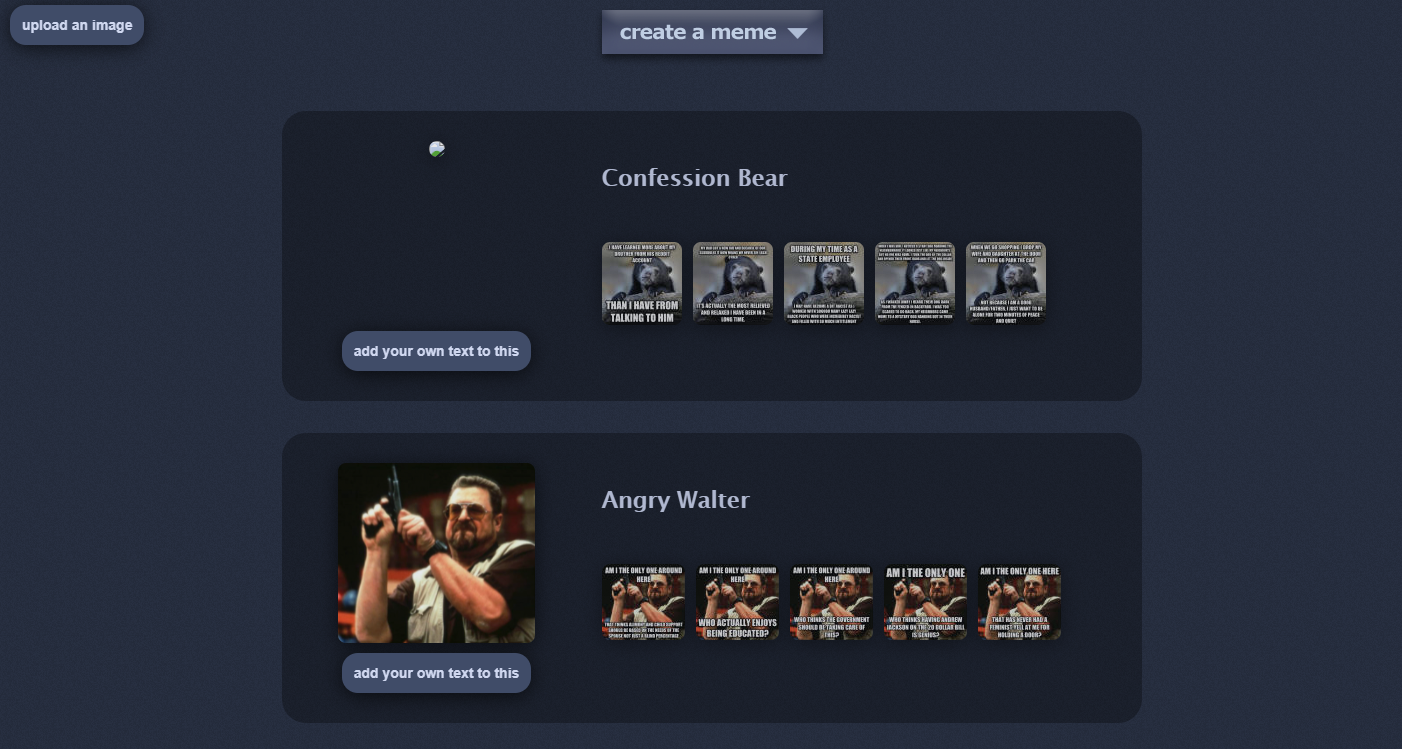 Livememe create your own meme generator

The right-up-in-your-face meme generator of Livememe makes it a fantastic choice to make a simple meme template.

You may also click “create a meme” and choose a meme template there.

You cannot customize the font in Livememe, but it’s a good website to start making your own meme template.

Make your own meme using Meme Generator in Imgur

At Imgur, an American website where one can share images, you can create a meme template quickly and easily.

Here are the steps on how to use its meme generator:

To use your own picture for your meme template, do the following:

In Imgur, you can upload your own photo, but you cannot choose a font or customize it. There’s only the default font; also, the texts are in uppercase letters. 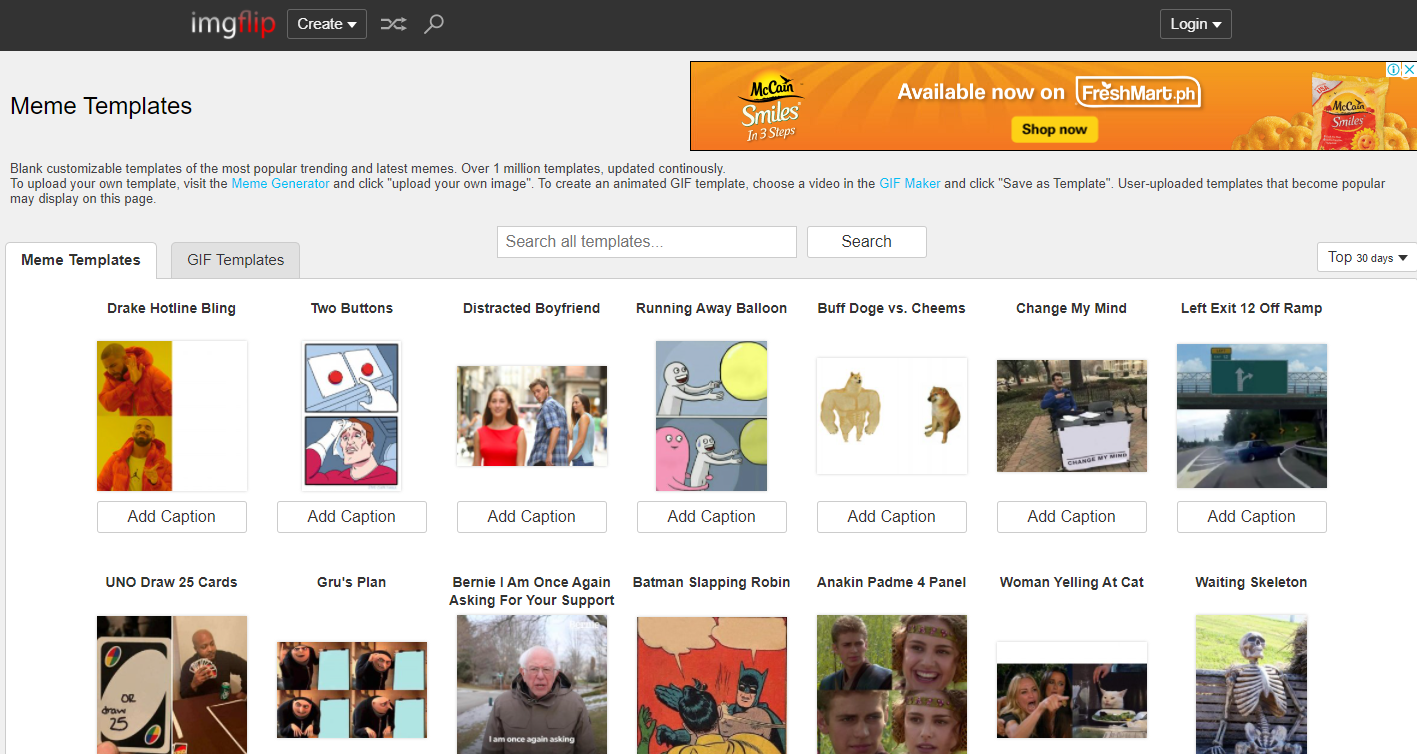 Make your own meme using imgflip

Imgflip is another American image-sharing website that can try for free to make a meme template. 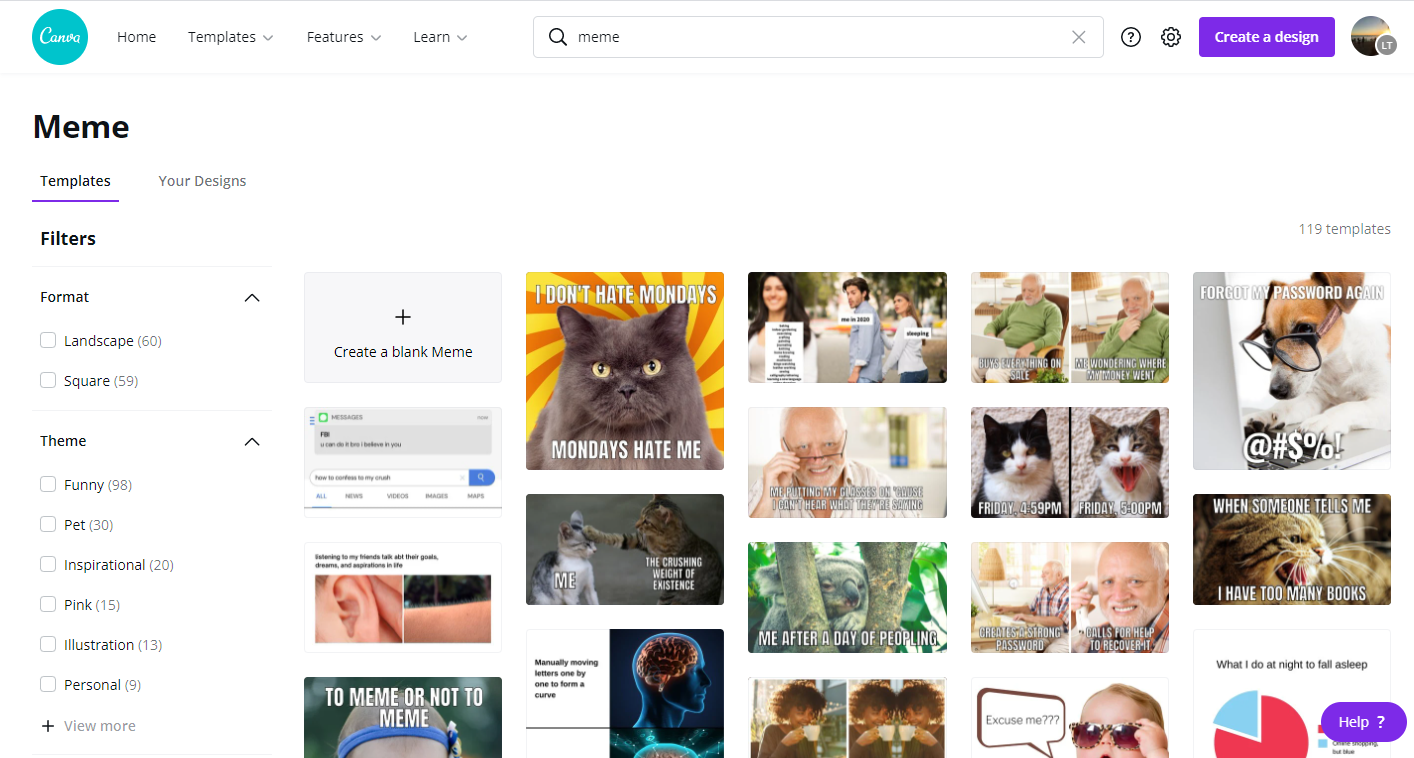 Make your own meme using Canva

The Australian graphics design company Canva invites people to create a meme template for free through its own meme generator.

Here are the steps:

Note: Before Filter, you will see a multi-colored box. Click it to change the background color.

Note: Depending on the order you want to edit your meme template, you may do Step 11 (edit text) first followed by Step 10 (edit picture).

If you don’t fancy any of the available free meme template and you don’t have a Canva account to upload your own picture:

Remember the Woman Yelling at a Cat? You can create a meme template with two pictures or sections by doing the following:

Important reminder: You can adjust the size of a photo but it will totally change the photo’s “contents” or what can be seen in the photo. For example:

If you want to make a meme template that doesn’t use a picture but only text, do these steps:

Of course, if you’re going to use your own photo, your meme template will be original. Who knows? You might create the next trending meme!

Use your own photos, therefore, as a meme template to increase the chances of getting your meme shared.