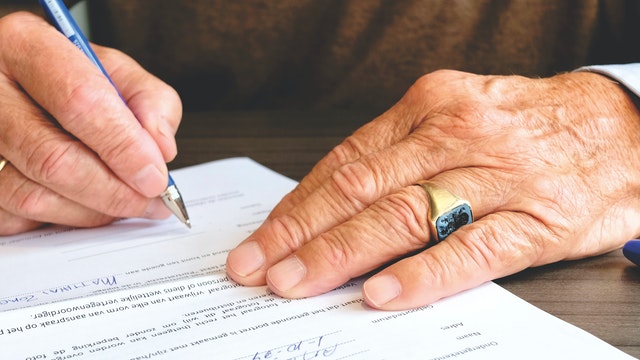 Are Promissory Notes Legal In California?

A California promissory note is a written document that, if properly executed, can be legally binding. The document's aim is to establish the existence of a loan made by the lender to the borrower. Promissory notes in California can be secured or unsecured.

When a promissory note is secured, the lender is given the right to take a specific piece of property, known as collateral, and use it to pay for all or part of the loan if the borrower defaults.

When a promissory note is unsecured, the lender is unable to collect collateral in the event that it is not paid.

Promissory notes are governed by the California Civil Code because they are a type of contract. According to California Civil Code 1624 (a), if the agreement between the borrower and lender contains a loan of more than $500 or if the borrower would take more than a year to return (regardless of the amount), the contract to repay (the promissory) note must be in writing.

Can I Write My Own Promissory Note?

A promissory note does not have to be difficult to write, despite the fact that it is a legal instrument. There are even services like eForms and LegalZoom that provide fill-in-the-blank templates.

A promissory note should include the following items at its most basic level:

Amount of the loan

Whether it's a secured or unsecured loan

If it's backed up by anything else:

What does the collateral entail?

When (for example, after three months of missed payments) can the lender take possession of the collateral? (How about a year?)

The rate of interest

Amount and frequency of payments

Due date for payment

Is there a cosigner on the loan, and if so, who is it? If you're charging interest on the loan, an online personal loan calculator will help you figure out how much you'll have to pay back. The loan amount, term length (i.e., how long the borrower will take to pay it off), and interest rate are all you'll need to enter.

Keep in mind that each state regulates the maximum interest rate that can be charged on a loan. These are known as usury laws, and you'll need to examine them to ensure that your loan interest rate is lawful if you're going to charge interest.

How Do I Write A Simple Promissory Note? 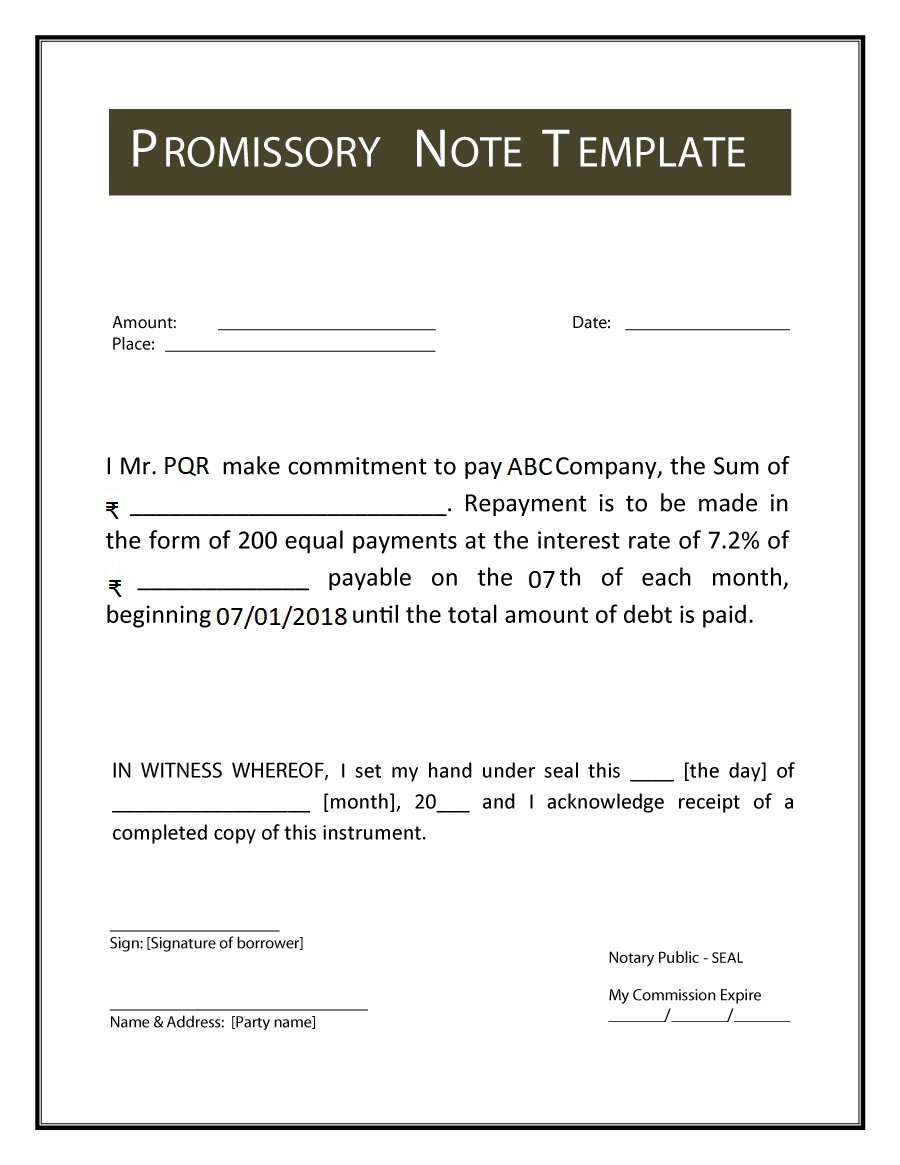 A promissory note specifies the terms and conditions of a loan, whether you are borrowing or lending money. Though it may appear to be just another boring document to go through quickly, it is an essential component of loans, containing critical – and legally binding – information.

Understanding how a promissory note works and what it should include is critical if you're about to sign on the dotted line on one.

A promissory note must have particular details in order to be valid and legally binding.

At the top of the page, the promissory note should include the date it was created.

Just like writing a check, the amount borrowed should be expressed in figures and spelt out in words. This eliminates the possibility of the due amount being misinterpreted or manipulated. If the promissory note is for $5,789, it should also include the words "five thousand seven hundred eighty-nine dollars."

Conditions Of The Loan

The loan terms spell out how the loan will be repaid, including how frequently payments will be made (monthly, quarterly, or yearly), when the first payment is due, and when the last payment is due. Rather than unclear timelines, exact dates should be used.

The Rate Of Interest

Some loans are secured by collateral in the event that the borrower is unable to repay the loan. Secured loans are what they're called. If the loan is backed by collateral, the promissory note should include the type and value of the asset.

Information About The Lender And The Borrower

The names and contact information for everyone involved in the loan are listed in this section. It specifies who is the lender and who is the borrower, as well as the mailing address or electronic destination for payments.

Finally, all parties must sign and date the promissory note for it to be enforceable, according to Wheeler. Both the borrower and the lender confirm that they understand the terms and their responsibilities in this way. "It's also a good idea to get a promissory note notarized," adds Schorr, "so the lender can be sure that the appropriate individual is delivering the loan payback pledge."

What Makes A Promissory Note Invalid In California? 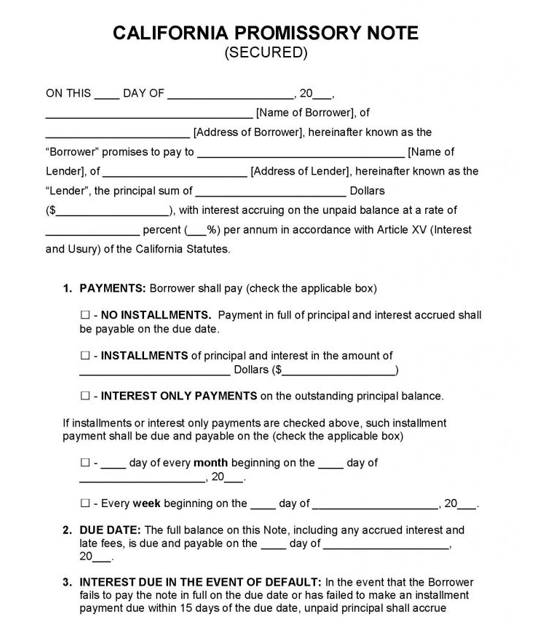 Certain Notes, like other types of contracts, must be in writing. This requirement is found in California Civil Code, Section 1624(a), which states that certain contracts "...are invalid unless the same, or some note or memorandum thereof, is in writing and subscribed by the party to be charged or by his agent." Agreements that, by their provisions, cannot be completed within a year of their signing (unless the agreement is solely to be performed by one party); or contracts that involve sales of commodities worth more than $5000 are examples of such contracts.

The laws and instances become fairly complicated, but suffice it to say that Notes can only be anticipated to be easily enforced if they are in writing and signed by the person who is obligated, and, as one wag put it, “An oral promise is as good as the paper it is written on.”

In California, usury is defined as charging an excessive amount of interest for a certain type of loan. Surprisingly, certain financial institutions are exempt from the usury laws (which is why credit cards are so expensive), and real estate brokers can engage in real estate loans and be exempt as well, but the majority of citizens are subject to the laws, and the penalty for breaking them is the loss of ALL interest to be charged. In most cases, the only thing that is lost is the interest that will be charged, not the principal.

In California, the standard limit on legal interest is ten percent, with some exceptions as indicated above. You should obtain legal advice if you want to charge more than ten percent (or if you are being charged more than ten percent). Intentionally engaging in usurious interest transactions can be prosecuted as a felony.

Do I Need A Lawyer For A Promissory Note? 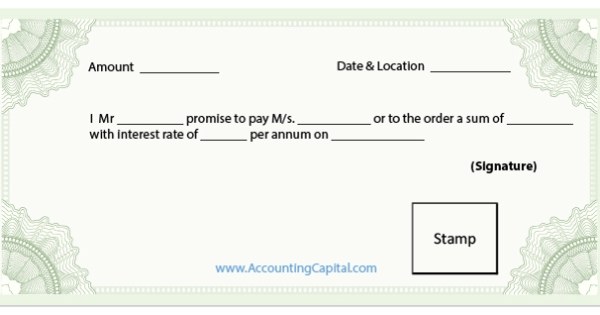 There are some promissory note templates available on the internet to assist you with the process. Even if you used an online template, it's still a good idea to hire a lawyer to assist you draft a personal promissory note. A lawyer can draft and/or evaluate the note to ensure that it meets all state legal standards. If there are any complications along the future, this will aid enforceability.

You don't want something so significant and valuable to be reliant on a template you downloaded. Especially since each state may have its own set of standards for a legitimate promissory note, and omitting one aspect of the note can mean the difference between authenticity and worthlessness.

If you have a problem with a personal promissory note that has not been paid and you are unable to reach an agreement with the individual who borrowed the money, legal action may be your only choice. A local collection lawyer can assist you in attempting debt collection and, if necessary, filing a lawsuit.

A lawyer can also check to see if the promissory note is enforceable and confirm that there was a violation. If you have a cooperative relationship with your borrower, debt collection can typically be done without legal interference.

What Voids A Promissory Note?

A promissory note is a contract that states that someone will pay your company a certain amount of money. However, if the note has been tampered with, it was not properly written, or you do not have the legal right to collect the debt, the contract becomes null and void. You must avoid the various legal hazards if you wish to collect what you're due.

Promissory notes are not tied to a specific person or company. You can legally sell a customer's note or exchange it with someone else if you have one. After that, that person has the right to collect on the debt. Regardless of who owns the bill, it is only legitimate if certain conditions are met.

You have a problem if you can't prove the note ever existed. Let's say your debtor stops paying you, and you decide to sue for payment. You can't find the note, or even a copy of it, when you go over your evidence. If you can verify that you possess the note and that it has been lost or destroyed, you may still be able to collect. You may not be able to prove your case if the only proof you have is your memories.

Judges have differed in their interpretations of what constitutes proof of debt. It's possible that a replica of the original will not satisfy because it's easier to forge.

You must prove that you are the legal owner of the note, even if you can prove it exists. The mortgage note was passed from one owner to the next in a number of occasions, but the second owner never got it. They never had possession of the note, even though they paid for it. The debt was unreachable.

Even if you have the original note, if it was not written correctly, it may be void. The note is worthless if the individual you're trying to collect from didn't sign it - which does happen. It might also be declared void if it violated another law, such as charging an excessively high interest rate.

You can nullify a note even if it was previously valid by modifying it. It's acceptable if you and the debtor revise the terms and sign off on the modifications; it's not going to fly if you make a change without the debtor's agreement. If you purchased the note from someone else and it was altered or void before you took possession of it, you're out of luck. Even if you bought the note in good faith, it won't be valid.

Do Promissory Notes Have To Be Notarized?

To be valid, a promissory note merely needs the signatures of the parties involved in the arrangement; it does not need to be acknowledged or witnessed by a notary public. Promissory notes are legally enforceable documents that include the terms and conditions under which money is to be paid from one party to another.

Because the note contains absolute stipulations to pay certain quantities of money under certain terms and conditions, it is required that all parties involved sign it. Businesses may choose to have promissory notes witnessed and confirmed by notaries public to avoid future disagreements regarding their legality, even if some state laws do not require it.